These are the three paintings I have submitted to the Diploma show in May 2017.

They are linked reflections on how we are looking after our home. Planet Earth.

From Wayland's Smithy to Harwell in the Vale of the White Horse. 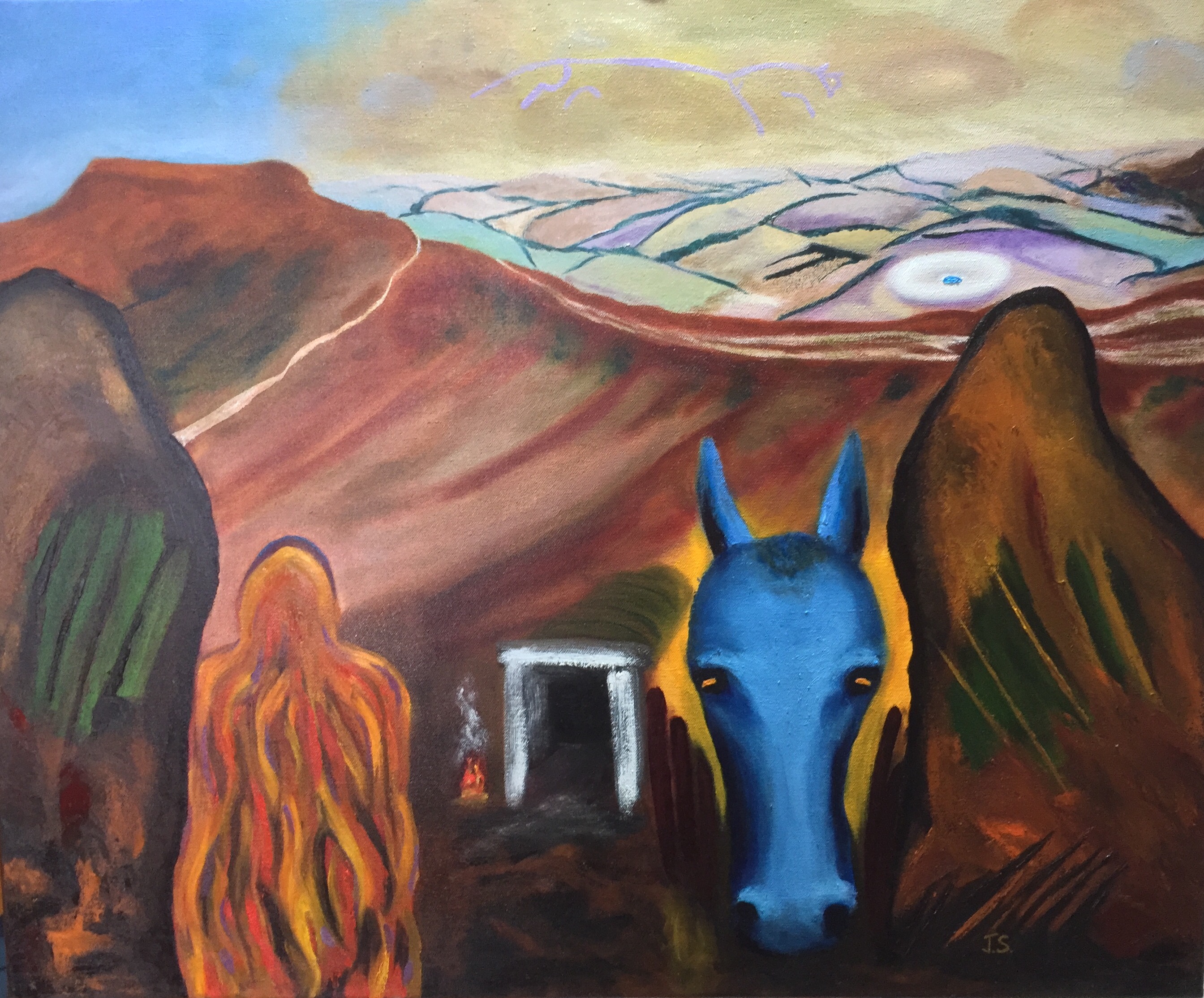 Windhorse is a concept I came across within Tibetan Buddhism it combines the strength, energy, endurance, and dignity of the horse with the natural force of wind, which is both gentle and permeable in its unobstructed transparency yet strong in force. It is a dynamic expression of basic goodness available within everyone.

I imagine Wayland shoeing horses overnight at the smithy as a clear expression of Windhorse and I believe the scientists at Harwell can be the modern day equivalent. Responsibility rests with them and us as individuals, hence the Windhorse in my paintings looking at you.

https://en.m.wikipedia.org/wiki/Wayland’s_Smithy if you walk on east along the ridgeway you pass the Iron Age Uffington castle  with the White horse.

As you walk on in time you can look down on Harwell  atomic energy centre.

I see Wayland’s smithy as the Harwell in Neolithic times. Amazing to see them so close together.

Please note that two of the sarsen stones at the smithy are missing; I have put them in my painting. To bear witness. 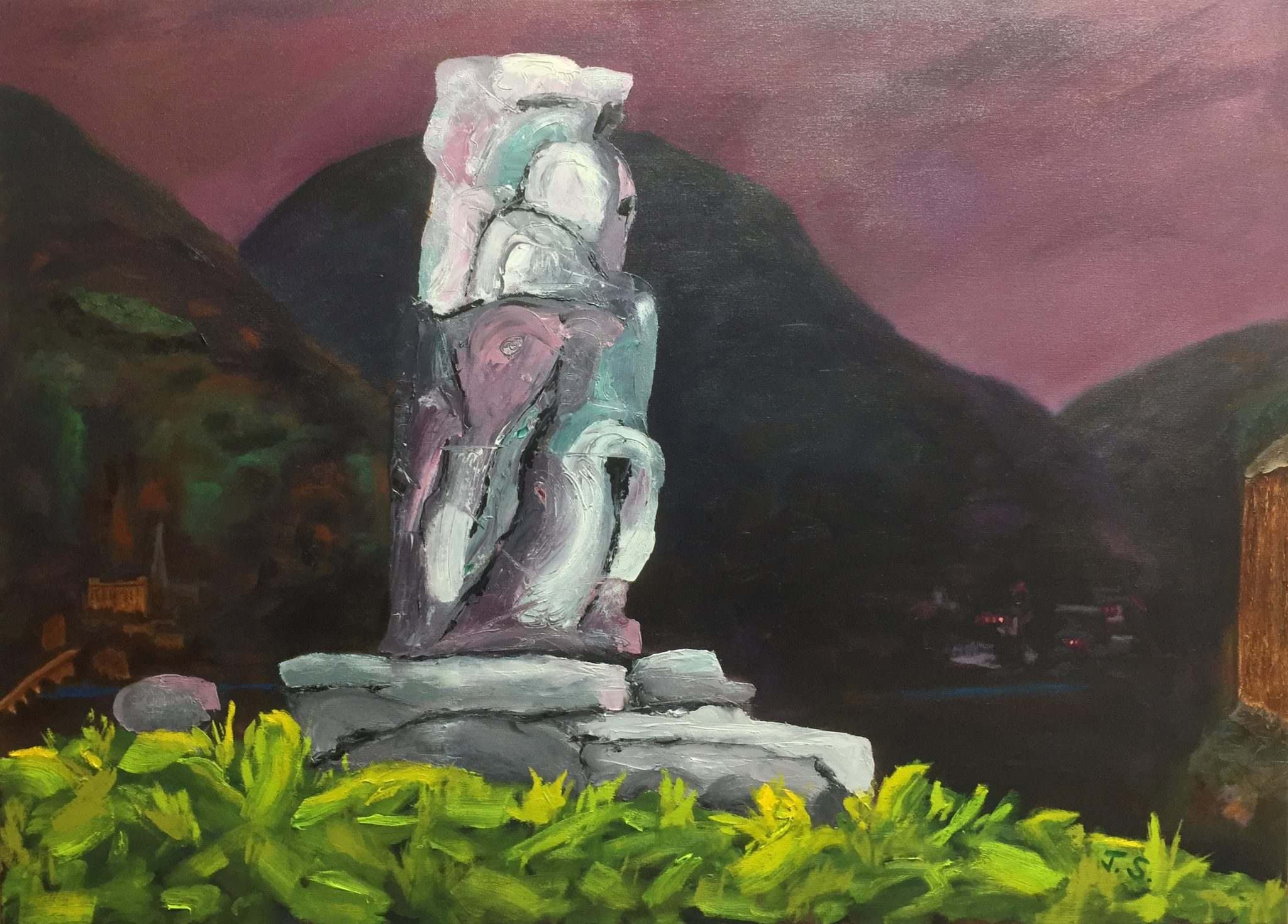 The ‘Lonely Shepherd’ or ‘Bugail Unig’ in Welsh is an interesting limestone pillar situated above the Clydach Gorge. According to local legend, a farmer at Ty-lsaf farm was so cruel to his wife that she threw herself into the river Usk and drowned. For his sin, the man was turned into a pillar of stone, but every year on Midsummer’s Eve (June 20th), he goes down to the banks of the Usk to search for his wife, calling her name – in vain. By next morning he has always returned to his lonely place. It was the custom in times gone by to white-wash the stone so that it could easily be seen when it walked on Midsummer’s Eve.

The pillar is on the edge the escarpment south of the black hills, looking into the valley of the usk river with the Monmouth and Brecon canal.

Fantastic views from Crickhowell to Abergavenny.

I walked through the Limestone quarries up to the lonely Shepard
http://my.viewranger.com/route/details/MjNfMTM1NA==

Quarrying the limestone was extensive along the whole ridge, so much so that the Monmouth and Brecon canal was approved in 1795 at a cost of £200,000. Thirty four miles with connections to any mine, iron work or quarry.open by 1805

Monmouth and Brecon canal is Level for 23 miles and construction started in 1795. The canal was only Used until the 1850’s when the railway took over.

The limestone pillar is well worth the, strenuous, walk as the views are spectacular.

I see this as a phallic symbol from the limestone quarries of the early 19th century. A time when male domination was rarely challenged and the phallus has a terrible history of rape and pillage, which still goes on today. Respect for all people and our Earth is desperately needed.

Harvest Sunset In A Warming World 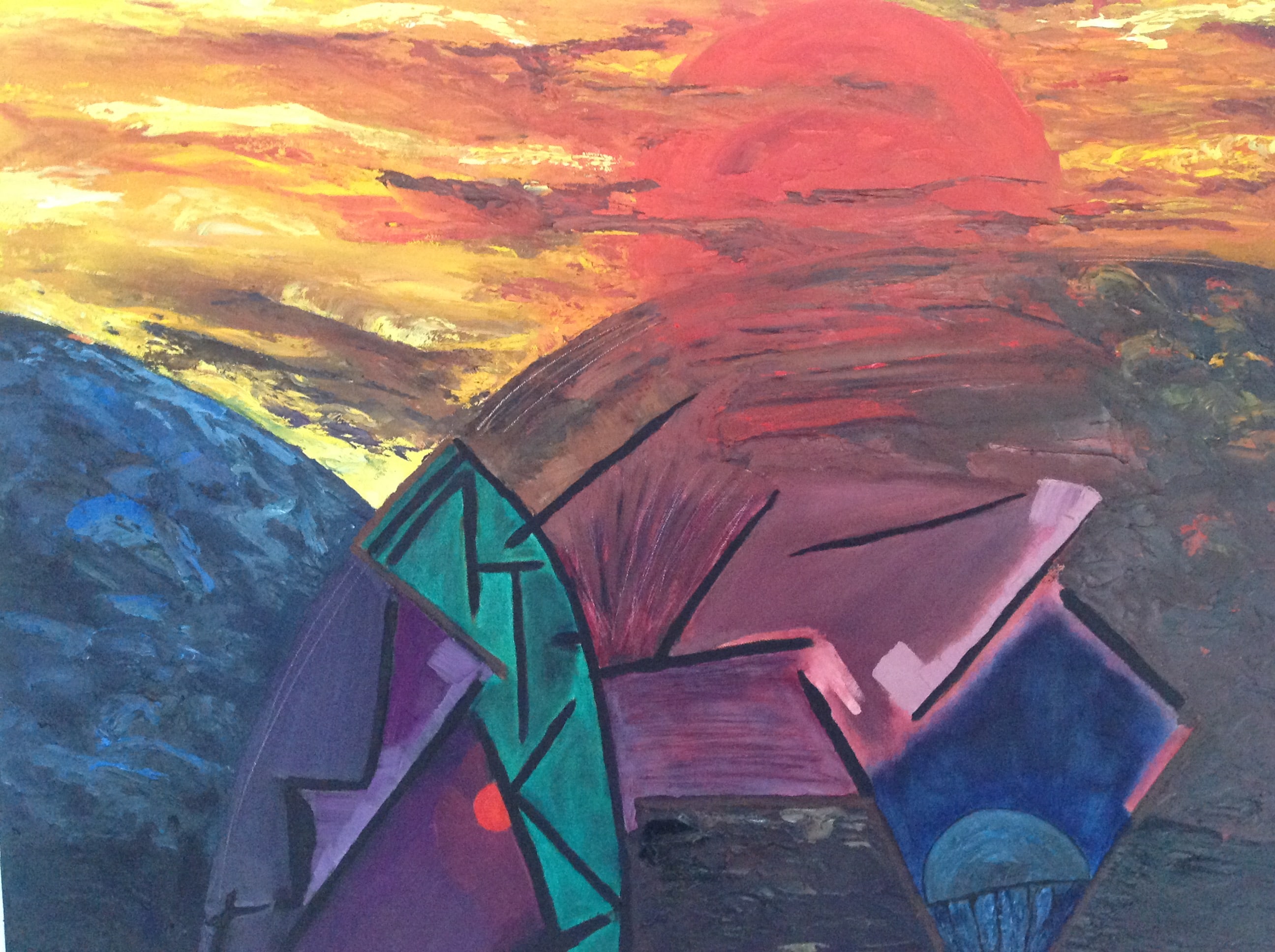 This picture is my reflections of harvest fires that have moved on to global warming increasingly effecting the land, sea and air that is home. I also highlight our global obsession with division and barriers reducing the important flexibility of movement.

As a young boy I helped on the farm that edges to the marshes of the blackwater estuary. A highlight for me was the primal pleasure of stubble burning at the end of the harvest (still legal in those days). Essex clay cracks wide open over the summer, the stubble can then fill the cracks, this creates underground fires that would burn for hours.

To be followed by glorious sunsets.

Clay reacts well to being burnt and crops can improve. The areas towards the marshes were important for salt production, they date from 140-80 BC (this is not a typo) leaving large amounts of burnt red clay easily seen in the fields today. These red clay areas always have the best crops and I like to think we see a balance between use of resources and supply for use.

Now we are heating our home planet with no benefit for the soil or wildlife we share our home with.